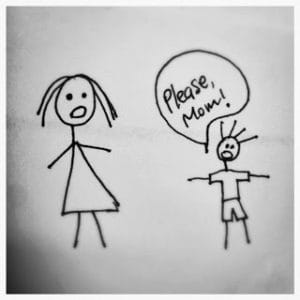 Raising children is the hardest job in the world. Most parents would agree that it would be easier if we had a playbook of definitive rules, instead of a myriad of possibilities. There are so many tiny choices imbedded in everyday life and we all wonder if one wrong decision will deeply impact our children. But then again, we are bombarded with magazines, blogs and professionals who confuse our sensibilities of ‘right’ and ‘wrong’ parenting ideals – if such concepts even exist.

While running the risk of completely ironically telling you how to parent your children, we have a few tips when it comes to choosing your battles. Some days you can face a screamfest head-on, other days you simply could not be bothered.

(1) While we recognize that consistency is key to daily parenting life, we’d like to really honestly admit that we aren’t consistent all the time. In fact, nobody is. The core of consistency is giving your child an expectation of how to behave in certain contexts. There are always exceptions to the rules – routine changes, sickness, tiredness, special occasions to name a few. Be as consistent as possible, but model the same kind of mental flexibility you would hope your children to be able to employ.

(2) Instead of saying, “No,” all the time, try saying, “Yes.” How? At first, restrict the things that your child is allowed to do, and then open up further privileges and possibilities once she proves that she can cope with the responsibility. For example, keep an earlier bedtime for a child until they can function on less sleep and still get everything they need done (e.g. Homework, chores etc.) It is so much more liberating and dignified to be able to grant your child access to things they would like, instead of taking away privileges you have given to them too early on.

(3) When your child asks you for something, ask yourself, “Will this affect the future?” This might seem like an intense question, but it will help you decide when to say yes, no or maybe. Sometimes, the first time you permit an activity, you are starting something that you will later regret. Maybe you can relate with that first soda you let your child drink, that